Visitors are currently not able to attend our facilities. Please refer to the visiting hours on visiting restrictions for more information.

Find out more about the science and aims of the 'Zika Mozzie Seeker' project by checking out the frequently asked questions below. These will be updated and expanded throughout the project as we receive your feedback. 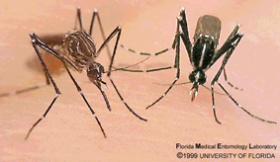 To clearly see the difference between mosquito species requires the use of a microscope.
'Zika mozzies' adults are the same size as most mosquitoes and have striped legs like many other mosquitoes. Adult Ae. aegypti have a distinctive lyre-shape pattern on their ‘back’, but may easily be confused with the local species (Aedes notoscriptus). Aedes albopictus adults have a single white stripe on their back.

Larvae (or wrigglers) are much more difficult to see because they are found in a wide variety of containers that hold water. A microscope is needed to see the differences between 'Zika mozzie' larvae and the local species.

In Australia, 'Zika mozzies’ currently only occur in Queensland. Aedes aegypti species  can be found throughout many of the cities and towns  of Queensland, especially North Queensland. However, they have not been recorded in South East Queensland since the 1950s. Aedes albopictus is found in island communities of the Torres Strait, following invasion in 2004-05. Both species lay eggs that are drought resistant in containers of water around homes and businesses, such as unscreened water tanks, bird baths, discarded bottles or tyres, or flower pot saucers. Larvae will grow once the eggs hatch after being flooded and grow through four stages (instars) into pupae. The adults emerge from pupae and like to rest in cool, shaded places in and around homes.

The female of both species like to bite humans and have the potential to spread diseases, such as Zika and Dengue. Unlike most mosquitos they are active in daylight hours. Bites of female Ae. aegypti most often occur inside buildings and unnoticed whereas Ae. albopictus are painful biters in outdoor areas. The male mosquito doesn’t bite.

The ‘Zika Mozzie Seeker’ project will help increase our confidence that 'Zika mozzies' are not present in the Metro South Health region of  South East Queensland.

Why are we asking you to set mosquito egg traps in your yard?

‘Zika mozzies’  don’t fly far from breeding sites – approx 500m – so finding them in the early stages of an invasion in large cities can be extremely difficult. It’s like looking for a needle in a haystack.

We currently work with local councils to manage a small network of mosquito egg traps at the main entry points for invasive mosquitoes into South East Queensland. However, this system does not monitor all areas of large cities for such mosquitoes.

For more effective monitoring in large cities, we need to place more egg traps in a wider range of locations to increase the range and intensity of the sampling. A good way to achieve this is to place egg traps (ovitraps) in lots of urban yards.

The help of the community is important – we need traps in as many yards as possible to stand the best chance of detecting an invasion of  'Zika mozzies', so please get involved if you live in the Metro South Health region.

What is special about the DNA...

The method allows scientists to quickly screen large numbers of freshly hatched larvae (wrigglers) from mosquito eggs (up to 5,000 in one sample) for the DNA of Aedes aegypti mosquitoes. Previously, scientists had to grow and painstakingly examine each larvae under a microscope.

Who can take part in the project?

‘Zika Mozzie Seeker’ is currently a pilot project confined to the Metro South Health region of Brisbane, especially urban backyards. However, there is potential for it to be expanded to other areas of Brisbane and South East Queensland in the future.

What is 'citizen science'?

Citizen science is an opportunity for members of the public to take part in scientific research, especially collecting data about the natural world.

The ‘Zika Mozzie Seeker’ project is one of Australia’s first health-based citizen science projects. We’re looking for members of the public to collect mosquito eggs using traps in their backyards so we can test the DNA.

For details about 'Zika Mozzie Seeker' as a citizen science project, please see the Atlas of Living Australia's Biocollect website.

How can I find out more about Zika and Dengue viruses?

Zika virus can cause a short illness similar to Dengue fever, but milder. However, there are possible risks to unborn babies if a pregnant woman is infected with Zika virus during her pregnancy. No cases of locally-acquired Zika virus have been reported in Queensland and Zika is not known to be present in local mosquitoes.

More information about Zika is available on the Queensland Health website and Australian Government Department of Health website.

Dengue fever is a viral illness with symptoms similar to a severe case of flu. Dengue virus is not endemic in Australia, which means the virus is not normally present in Queensland unless someone brings it into the country.

More information about Dengue fever is available on the Queensland Health website.

Give us your feedback here.