Visitors are able to attend our facilities in Metro South Health. Please refer to the visiting restrictions for more information.

Dr Wagels said he used a 3D printed biocompatible and bioabsorbable implant for Mr Ellis, 26, to replace a section of missing skull. Prior to this, Mr Ellis had a different implant that had become the source of a life-threatening infection.

“Brodie was involved in a motorcycle accident in December 2018 that required parts of his skull to be removed and later replaced with synthetic implants.

“Unfortunately, one of the implants became exposed and developed an infection,” he said. “Because the implant had no blood supply, the infection just kept getting worse and worse, so it had to be removed. This left Brodie with headaches and a contour deformity of the skull.”

The 11-hour procedure to implant the 3D-printed replacement bone, which has the ability to encourage natural bone growth, was performed on Brodie in December last year. This involved a team of plastic and reconstructive surgeons, anaesthetists, neurosurgeons, nurses, assistant surgeons and technicians.

Extensive planning was required prior to surgery to design and manufacture the implant, with the support of the Translational Research Institute (TRI), Australian Centre for Complex Integrated Surgical Solutions (ACCISS), and Singapore-based manufacturing company, Osteopore.

According to Dr Wagels, this massive team effort is showing promising post-operative results for Brodie.

“The latest CT scan taken eight weeks after the operation shows bone forming both on the outside and in the inside of the implant, indicating the body has recognised the implant as broken bone that needs to be healed,” Dr Wagels said.

“The special thing about Brodie’s implant is that it is completely absorbable, so it will disappear as the new bone forms within and around it.”

Mr Ellis’ implant is the second 3D-printed bone replacement Dr Wagels has created to support patient healing. In 2017 he performed a similar procedure at the PAH to replace missing bone in a leg, which was a world first.

The ground-breaking surgery allowed the patient, Reuben Lichter, to avoid an amputation and now walks successfully on his own two feet as a result of regrowing his own segment of missing tibia bone with the help of the implant and reconstructive surgery.

Dr Wagels said supporting Mr Ellis with his recovery had taught him much about the strength of the human spirit.

“Brodie is one of the most awe-inspiring and courageous people I know. He is a truly remarkable young man,” he said. “Whatever is thrown at him, he gives it his all.”

Dr Wagels said the pair have formed a strong bond since Mr Ellis’ accident brought them together 14 months ago. “I haven’t met too many like him.” 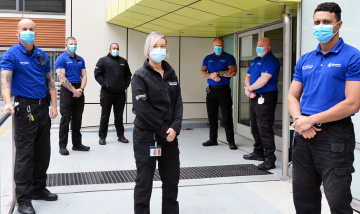 Safety and Response Officers part of the healthcare team

PA Hospital boasts a multicultural and ethnically diverse team of Safety and Response Officers who are dedicated to keeping staff, patients and visitors to the hospital safe and secure. 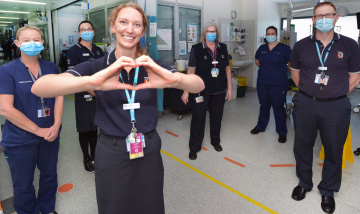 Solidarity in the midst of the pandemic

At a time where state borders seem like iron bars, there is nothing like the solidarity of health care workers to bring us all together.