The latest in virtual reality technology is changing the lives of patients suffering debilitating balance conditions thanks to an Australian first at Logan Hospital.

More than 25 patients are already reaping the rewards of the Bertec Balance Advantage System since clinics began in June 2022.

Logan Hospital Advanced Vestibular Physiotherapist Jacinta Foster said while a similar machine was located at the University of Canberra, this was the only one in an Australian hospital and the only one used on patients anywhere in the Southern Hemisphere.

She said a range of patients, from young children to the elderly were now receiving treatment and seeing improvements after only a couple of sessions.

The machine was acquired thanks to a $580,000 grant through the Queensland Technologies Futures Fund.

“We have treated children as young as nine with concussion injuries and chronic dizziness, and older patients with balance impairments and functional disorders that cause significant balance issues with the machine.”

Ms Foster said the key is an immersive dome-shaped screen and moving force platform that work together using computerised input to assess body sway and help determine which systems of balance; visual, vestibular (inner ear) or somatosensory (perception of touch) was the cause of the balance impairment.

“Once we understand the cause of the patient’s imbalance or dizziness, they can receive immersive virtual reality and balance treatment once a week for six weeks which will be continuously adapted and progressed according to their improvement.”

Ms Foster said she was already seeing success with patients who had previously had little success from traditional vestibular rehabilitation.

“We have been pleased by how patients are responding to the treatment; patients who have been told they just need to manage their conditions are experiencing improvements in their baseline symptoms and feeling more confident as a result.

“I’ve also had patients whose quality of life has improved from not being able to spend more than 10 minutes as a passenger in a car without vomiting, to now being able to travel without a problem.”

Ms Foster said these conditions were extremely debilitating, made people feel sick and fall over, gave a sense of constant rocking much like sea sickness, and often required medication to provide relief.

She said the clinics, which currently operated three days a week, were also already receiving referrals from the Queensland Children’s Hospital for children with concussions and head injuries and from across the state including Townsville and Mackay.

Former AFL player Zac Stanton said he suffered a serious head injury during a game that had left him with permanent hearing loss in one ear and significant balance problems as a result.

The 26-year-old said his head injury occurred around a year ago and that he had been “off balance” since; initially affecting his ability to drive and still affecting his work as a carpenter.

“This treatment is really exciting,” Mr Stanton said. “It’s really the first time I’ve felt I am where I need to be.”

Shaun Joseph, 54, said he sustained a serious concussion whilst training in roller derby as well as painful nerve damage from his ear to his eye.

“I can’t fly on a plane, I have to have the windows down in the car and going in lifts makes me dizzy.

“This treatment is really helping me already with my balance and controlling my movement and I have been able to return to training. I am hoping to represent Australia in roller derby,” he said.

Ms Foster said it was fantastic to see patients like Mr Joseph enjoying real results after only a few sessions on the machine and that she looked forward to many other patients also improving their quality of life. 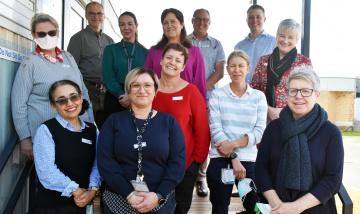 Our Logan Hospital Nurse Navigators are continuing to provide advanced clinical and professional care for patients despite a challenging time over the last several years. 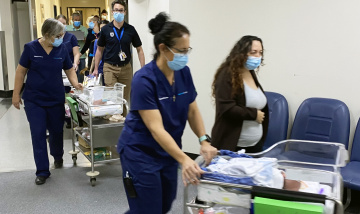 Baby train has Special Care Nursery on the move

It was quite a celebration recently for Logan Hospital’s tiniest patients who moved to their new temporary home in Ward 2D.