One of PA Hospital’s most dedicated doctors and awarded medical educators, Associate Professor Brian Miller will be remembered for mentoring and inspiring countless medical trainees over decades of dedication to clinical training.

Dr Miller, who became a member of the General Division of the Order of Australia in 2012 for “service to medicine, to trauma education, as a mentor, through contributions to improved surgical techniques”, lost his battle with a medical illness on 1 October 2021.

In a dedication to his long-time colleague, PAH surgeon Dr Nicholas Lutton was able to wrap up a surgical career spanning the globe. From the halls of London University, the hospital corridors of Saskatchewan in Canada and decades at PA Hospital, to surgical theatres established in tents in West Timor with the Overseas Specialist Surgical Association of Australia, Dr Miller’s commitment to over 5000 surgical patients and ~4000 clinical trainees is a celebrated legacy.

Dr Miller’s early clinical life is accurately described as ‘exotic’ growing up in Kenya, studying in London, clinical placements and career progression through the United Kingdom, Jamaica, and Canada before a move to Brisbane in 1988.

His career at PAH and University of Queensland since that time was dedicated to the introduction of new surgical techniques, clinical training and examination with an overarching passion for teaching and mentorship which he did for many decades.

“His weekly ward rounds in the colorectal unit were legendary for their inclusivity, simplicity and the breadth of surgical topics covered. Nursing staff, students, residents and registrars over many years remember these fondly,” said Dr Lutton.

Dr Miller’s affinity for teaching was recognised with the Mervyn Neely Memorial award on two occasions for excellence in surgical teaching UQ students and in 2016 he was awarded a UQ Lifetime Achievement Award for his decades of service.

Locally, Dr Miller was the winner of the student-nominated Award for Excellence in Medical Education in 1998 and 2011, when he was inducted into the Hall of Fame for exemplary teaching and support of junior medical staff at PAH. This was on the back of an acknowledgement for being the most consistently nominated educator over a decade in 2004.

Resident education is recognised as a priority at PAH and Dr Miller was a testament to active supervision, mentoring, motivation, high quality feedback and his ongoing investment in the health and well-being of junior medical staff.

On behalf of all who were taught, inspired and treated by Dr Miller, Thank you.

For more on Dr Miller. 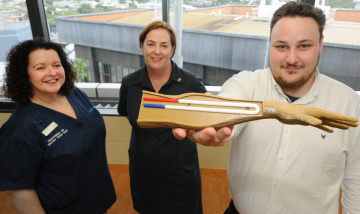 Princess Alexandra Hospital renal nurses have pulled together the best minds in the business coming up with a novel 3D-printed model of an arm and fistula to help hundreds of patients overcome their ‘white coat amnesia’ around the complexities of dialysis.

Princess Alexandra Hospital has become the first public hospital in Australia to launch a remote monitoring and intervention program for neurology patients who have already had Deep Brain Stimulation surgery to manage tremors.