I’ve spent about half my life working as a midwife. I have no idea how many births I’ve attended in that time. It would be in the thousands. The best compliment I’ve ever been given came early in my career from a pregnant 16-year-old client who had been in an abusive, incestuous relationship. We had a detailed heart-to-heart when we first met and the original plan was that I wouldn’t attend her in labour because of potential conflicting emotions and negativity. But when the time came, she asked for me to be there for the birth. In some way, I’d hopefully helped her heal. She’d seen me as a professional free from any fear or association with what had happened to her.

Up to one in three women has been abused at some point, a large proportion sexually. The statistics are horrible. As a male midwife, that’s one of the things I’ve learnt to be extremely sensitive to. It’s across the board, regardless of a woman’s socio-economic status. I have no qualms telling women they’re my boss when they’re sitting opposite me, not the other way around. I can give them as much information as they want but ultimately, what they do with the information is my guide.

When I left school in the mid-1980s in the UK, where I grew up, my plan wasn’t to become a midwife. My first university course was studying fine art painting. I remember stacking supermarket shelves, doing night shifts to pay my way. I’d grown up around Darlington and Durham in the north of England and moved south to study at the Brighton School of Art. I had to finance everything myself.

In my second year, I dropped out. I’d had a few exhibitions as a painter and the university was teaching me something I was already doing myself.

Around that time, I saw an advertisement for nursing recruitment and thought: I can do good for society and also paint. I switched to nursing and towards the end of my training was assigned to a maternity unit. During that time, I delivered a baby when a first-time mum gave birth much quicker than expected. I was the only other person in the room.

Midwifery felt right for me despite the challenges of being a man in a world dominated by women. Being a male midwife has never gotten in the way of women accepting my care, even though I’ve fought for women’s rights, including their right to be cared for by a woman if they so choose.

I could have immediately started midwifery training after completing my nursing degree in the early 1990s but was advised that having experience as a nurse would benefit me as a midwife. I spent eight months on a surgical ward before starting 18 months of midwifery training. Working as a general nurse gave me an understanding, for example, of how the body deals with rapid blood loss or having an underlying heart problem that might be relevant to a person having a baby. It’s definitely helped my midwifery practice.

I emigrated to Australia in the late 1990s with my first wife and two daughters, Erin (now 23) and Roisin (21). When I left the UK, I was one of only 72 male midwives in a nation of about 60 million people. Now I’m the only man among dozens of midwives at Logan Hospital, south of Brisbane.

I’ve been married three times and have seven children, including my third wife Petrina Duncan’s son from a previous relationship, Chayse Hamilton (13), who I’ve inherited in a beautiful way. He’s asked me to adopt him. Petrina, 37, is a consultant obstetrician working at Kindred Midwifery, Obstetrics and Gynaecology (based in East Brisbane). We have two daughters together – Orla, 5, and Saoirse, 3. I also have two children from my second marriage – Angus, 17, and Freya, 13.

Unfortunately, there are still preconceptions about gender roles in society. When a package comes to our home for my wife, addressed to Dr Duncan, occasionally she’ll be asked if her husband’s home to sign for it. That still makes me laugh. It’s weird that those gender stereotypes are still there in the 21st century.

I haven’t painted much since becoming a midwife but Petrina has bought some canvases and oil paints for me to get back into art. My style is to paint the human form but in a way that’s emulative of landscapes. I’ve sold everything I’ve ever exhibited, about 20 or so paintings.

I was given tickets to the Woodford Folk Festival, held north of Brisbane over each new year, as payment for one of my pieces. I love painting but I’m glad I chose midwifery as a career. 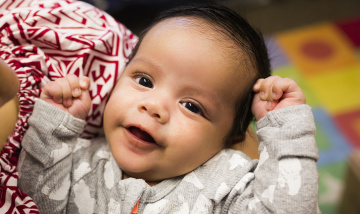