Respiratory researchers based at the Princess Alexandra Hospital and the Translational Research Institute (TRI) are leading a clinical trial to test a potentially simple and inexpensive solution to older people succumbing to influenza.

“We had an idea that if we changed the diet, we could improve the immune system’s ability to respond to the flu vaccine,” said Prof Upham.

“After running a small pilot trial in 2019, we found that older people who consumed a fibre supplement daily produced a lot more antibodies after getting a flu shot,” he said.

COPD sufferer, Tish Miller, said the vaccines have made a big improvement to her quality of life, especially during flu season.

“Since receiving the vaccinations, I have been able to come through the dreaded flu season unscathed.

“I closely follow the guidelines by the respiratory team at PA which has given me the incredible ability to keep going,” she said.

To confirm the relationship between dietary fibre and the flu vaccine, Professor Upham is leading a Phase II clinical trial at the Princess Alexandra Hospital in Brisbane.

The trial runs for six weeks, with participants taking either a fibre or complex carbohydrate supplement twice daily, two weeks before receiving a free flu vaccination, and for four weeks after. Nurses will also take a blood sample at the beginning and end of the trial.

“We are looking for volunteers over 55 years of age, who either have healthy lungs or the lung condition chronic obstructive pulmonary disease,” said Prof Upham.

“It’s a very simple trial to take part in and we’ve shown that combining a daily fibre supplement with the flu vaccine is safe, with the worst side-effects being a slightly rumbly stomach in patients with a previously low fibre intake.”

People interested in taking part in the study can contact study nurse, Krystal Rudland, via phone (07) 3176 5394 or email: PAH-LARC@health.qld.gov.au. Participants will be required to make three visits to the Princess Alexandra Hospital, with parking reimbursable.

A smoking ceremony was held this week on the site of a future Yarning Circle to take shape on the eastern end of Princess Alexandra Hospital building. 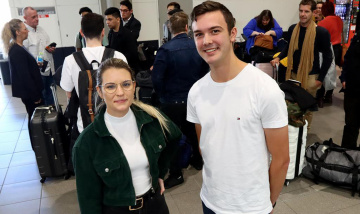 PAH Nurses respond to the interstate COVID19 call for help

A team of 10 nurses from Metro South Health have headed to the frontline in Victoria as the southern state struggles to cope with a growing COVID-19 outbreak.