The Princess Alexandra Hospital is open and accepting patients.

Less than 24 hours after a malfunction was detected with the sterilisation equipment used to prepare instruments for theatre, our investigation has identified a cause.

Director of Infection Control at Princess Alexandra Hospital, Dr Geoffrey Playford confirmed that equipment is sterile, however a chemical in the process is leaving a residue on the packaging.

“Our investigation has revealed that a change to the chemical added to the steam boilers, which is safe, improves the quality of the steam by altering things like the pH and oxygenation of the steam, is leaving a residue on the wrapping of those sterile packs.

“We can confirm the instruments are sterile, we have tested them over and over, we are working to remove the chemical residue from the steam lines now,” he said.

He confirmed that PAH complies with Australian standards for sterilisation and there is no risk to the effectiveness of the sterilising process.

“As always, patient safety is our priority and we can confirm that no patients have been exposed to unsterilised equipment,” Dr Playford said.

“Elective surgeries are not scheduled for weekends, so this will allow us enough time to finalise the purging of the steam lines to remove the chemical trace.”

PAH is performing some emergency surgical procedures using reserve sterilised equipment, however elective surgery has been rescheduled at this time. We thank the community for their ongoing understanding as we do this. 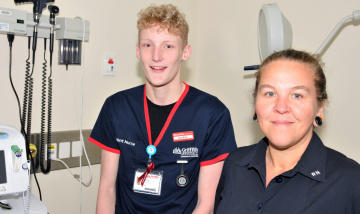