Redland Hospital is giving sick children living on Brisbane’s bayside access to a range of vital new health services closer to home saving families hundreds of trips into the city every year.

Director of Paediatric Services Dr Dougie Thomas said Redland Hospital is working closely with the Queensland Children’s Hospital (QCH) to establish local services, only previously available to paediatric patients in the city, nearer to their homes.

He said whilst Redland Hospital had already established its paediatric diabetes clinic and inpatients service earlier this year, staff were now able to provide infusions as day-case inpatient procedures after working closing with a team of gastroenterologists.

“Our diabetes service has the potential to care for up to 50 local children who need to visit the hospital four times a year. That is 200 occasions of service that parents can now access closer to home,” he said.

“We launched a paediatric surgical outpatient’s clinic last month where our goal is to provide care to new patients and follow-up patients locally following their surgery at QCH, and we have been able to reduce the age of our paediatric emergency surgery patients from 12-years-old to eight-years-old, and hopefully to five into the future.

“We expect to see around 60 new and 120 follow-up surgical patients which are further appointments that parents do not have to travel into the city to access.

“Eight local gastroenterology patients have also already been identified who need to visit hospital every six weeks, or eight times a year.”

Dr Thomas said he hoped a Redland Hospital paediatric ENT service could be developed to start in 2020 which would provide outpatient care and elective surgery down to age one.

Other services to develop include rheumatology, haematology and oncology services for local children where appropriate.

Dr Thomas said Redland Hospital was in early discussions with the QCH endocrinology team with hopes to offer these services locally as well.

He said work had also been done recently to expand services in the Special Care Nursery with an increase in beds from six to nine including a new isolation room and an additional two-bay resus beds with their own entrance in a separate area for twin care if required.

“We now have high flow capabilities, which is a variation of CPAP (continuous positive airway pressure) to enable children to be repatriated more quickly from the tertiary hospitals.”

Dr Thomas said being able to provide these expanded services at Redland Hospital was exciting for local families with children who required ongoing or post-surgery care.

“These are local services for local children – and it is important to remember that the services we provide are very flexible.

“We can do an infusion before or after school, limiting the impact on a child’s school attendance, and our free car parking for parents can also relieve some stress.”

Birkdale mum Anne Sargeson said the new, local services had made a world of difference to her family and daughter Erin who required monthly transfusions for Juvenile Idiopathic Arthritis (JIA).

She said Erin, 16, and a Year 11 student, loved being able to access her treatment, which took between three and four hours, closer to home.

“It is less stressful for Erin and we have come to know the nurses and doctors who are just amazing.”

“It’s just been great. We can schedule Erin’s appointment’s after school which has been important and financially it is less stressful not having to travel and pay for parking.

“I have nothing but good things to say,” she said. 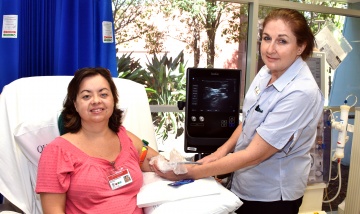 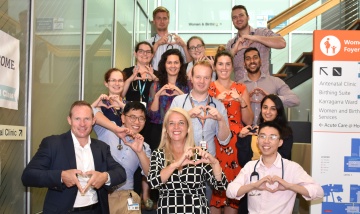 The next generation of doctors launched their careers last week, with thirteen medical interns commencing their training at Redland Hospital.