One of Princess Alexandra Hospitals (PAH) own was announced this week as a nominee for the 2020 Queensland Young Australian of the Year through his work surrounding the inclusion of men in nursing.

Intensive Care Unit registered nurse, Luke Yokota, continues to be an advocate for diversity in the profession through his role at the PAH and also his connection with the Australian College of Nursing (ACN).

“I was surprised to find out I had been nominated for the work I have done focussed on men,” he said.

Luke leads a national awareness campaign directing men towards a career in nursing and is also the Chair of the Men in the Nursing Working Party for the ACN.

“In August, I was the keynote for the National Nursing Forum in Hobart addressing over 600 delegates and, from that, came the launch of the Men in Nursing EBook.”

The book shares the stories of 28 men within the profession, from undergraduates all the way to Chief Nursing Officer.

“These men share their stories of why they became a nurse, what inspires them, their role models and mentors, hopefully shedding some light on the value of men in the profession and changing the pre-conception that nursing is for women only,” he said.

For Luke, the plight to advocate for more men in nursing is a personal one.

“When I first told a family member I wanted to do nursing, they legitimately thought it was a joke and laughed in my face.

“I believe if there are any barriers or perceptions suggesting a man can't be a nurse, we have failed as a community.

“I want to share a positive message about how nursing is for everyone, not just one gender, it's about really promoting diversity and inclusiveness and showing how that actually makes a better healthcare system,” he said.

The percentage of men in nursing has stabilised at 10 per cent for close to eight years.

Luke hopes his work advocating for diversity in the profession will change this statistic, but also encourage men to make a career choice that is rewarding and empowering. 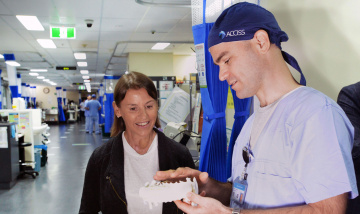 Six surgical teams have joined forces at Princess Alexandra Hospital in a mammoth surgery that has saved Queensland mother, Keri Frecklington from a life without speech, eating and mobility after a successful 20-hour surgery 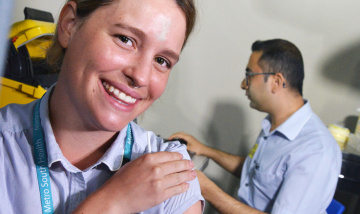 Registered Nurse Molly Baretta, who works as part of Metro South Health’s outreach to quarantine hotels, has become the first nurse in Brisbane to receive the Pfizer COVID-19 vaccine at the launch of the Vaccination Hub at Princess Alexandra Hospital on 24 February.