Since June of this year, Ward 5B has been working to boost their patient’s recovery through movement, following a concept introduced in the UK.

The Boost Project, as its being referred to, is getting patients out of bed sooner with the aim of reducing pressure injuries, deconditioning and discomfort while boosting spirits.

“Over the trial period, we have noticed patients have taken well to the initiative, even asking staff to get out of bed more proactively.

“At meal times, the team go throughout the ward getting patients shoes on and sitting them out to enjoy their meal as they would at home,” said Nurse Unit Manager Ward 5B, Amanda Kopp.

Upon admission, patients of the ward are educated on the benefits of the project.

“We have information on the project at the bedside as to why it is important.

“The staff also take the time to explain the project’s benefits such as improved circulation, better skin, better digestion and even the possibility of an earlier discharge, as they are caring for the patient,” she said.

The team have already received a number of compliments around the initiative, noticing patients are happier and reports of pressure injuries decreasing.

The second phase of the trial will look to encourage patients to bring in day clothes for their stay.

“Pyjamas reinforce that a patient is unwell so by getting them out of their gowns and into their clothes, it adds a level of normality to their day,” she said.

The Boost Project will expand throughout the hospital into the new year with Amanda’s help.

“It can give patients back time because they may be able to go home earlier, so it is exciting to see how this will improve our patient care across the hospital.” 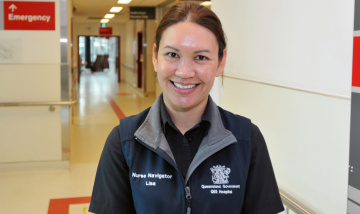 Wound management back on track thanks to Nurse Navigators

Living with the pain and inconvenience of venous leg ulcers is a challenge Nurse Navigators Lisa Sansee (pictured) and Joanne Irons are helping hundreds of patients say goodbye to. 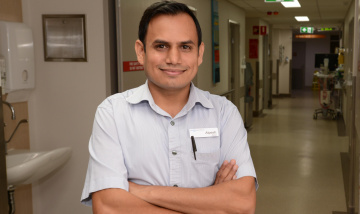 Alpesh is QEII’s Nurse of the Year

In the most challenging year in a century for health practitioners, Clinical Nurse and Nursing Team Leader Alpesh Patel has been named QEII’s Nurse of the Year for clinical and leadership excellence.