A new rapid-expansion medical ward was craned into place at Logan Hospital today, kickstarting a huge $460 million major expansion at the hospital.

Visiting the hospital today to inspect the craning-in of the ward, Minister for Health and Ambulance Services Steven Miles said the additional 28 beds would be open in early 2020.

“This new $9 million ward was manufactured off site, delivered to the hospital on 19 semi-trailers, and will now be fitted out with appropriate services including plumbing, medical gases and clinical lighting,” Mr Miles said.

“Once commissioning work is complete, it will open in the new year with 73 new full-time employees including doctors, nurses, health professionals and support staff.

“This new ward will help manage demand as part of our planned $460 million major expansion, which will see an additional 206 beds and treatment spaces added to the hospital.”

Member for Waterford Shannon Fentiman said the craning-in was the start of the major expansion that will deliver more healthcare services for the Logan community.

“Once completed, this new ward will mean patients will be cared for sooner and spend less time in the busy emergency department,” Ms Fentiman said.

“It’s fantastic that this redevelopment is one of the state’s largest ever hospital expansion projects.”

“The project will also include a major refurbishment and expansion of existing clinical and support services in Buildings 1 and 2.” 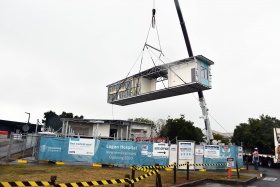 “Logan Hospital is situated in one of Queensland’s largest growth corridors, and we’re supporting that growth with the services our community needs,” Mr Dick said.

“Once the Logan Hospital expansion project is completed, the hospital will have nine operating theatres, four endoscopy suites and around 650 beds through the whole facility, which is a fantastic outcome for locals.”

“A new Mental Health Decision Unit will be added to the emergency department, which will provide a safe and quiet area for patients experiencing a mental health crisis to be triaged and treated,” Mr Power said.

“The Government is delivering on its commitment to expand the hospital to meet the needs of this growing population, so the people of Logan can receive the high-quality healthcare that they need, close to home.”

Member for Macalister Melissa McMahon said it was great news for the community.

“The scale of this expansion is unprecedented and through this investment Metro South Health will be able to meet the needs of the Logan community in one of the fastest growing regions of the state.”

We are looking for more Winter Warriors!

Metro South Public Health Unit has extended the the Winter Respiratory Viruses Sentinel Surveillance Program until 30 September. It's free to join and easy to do – simply provide a self-collected nasal swab and deposit in a collection box at your workplace. 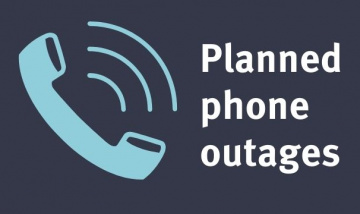