Fully vaccinated visitors may attend our facilities. Please refer to the visitor restrictions for more information. Find out where to get tested, where to get vaccinated, our COVID-19 response and read the latest Queensland Government information.

New graduate nurses at QEII Hospital, Georgia and Alexia Condoleon are proving there’s twice as much to love about nursing in surgery at QEII.

The identical twins are both Griffith University graduates who have undertaken their graduate nursing year at QEII in neighbouring surgical wards.

Adding to this reflection is the fact that they were both inspired into a healthcare career from the same family experience with the hospital environment and they both want to make a positive impact on the patient experience.

“I love that nursing is a continuous learning opportunity allowing me to build my knowledge daily,” said Georgia (left) who is keen to continue working at QEII where she has been welcomed as a member of the Ward 2B team. “The team are amazing and always willing to teach me new things, but mostly they are so inclusive which makes me feel even more supported for the start of my nursing career.”

Unsurprisingly, Alexia (right) has confirmed that increasing her knowledge and skill set about post-operative cares and procedures is one of the key things she loves about working in Ward 2A.

“There is plenty to learn in surgical nursing; I thrive in fast-paced environments and love keeping busy. I have loved my time in Ward 2A orthopaedics and urology and they have made the transition from a student nurse to registered nurse far less overwhelming,” she said.

While both nurses love to travel – especially with family – there are no plans to deviate from their chosen paths of nursing at QEII.

“I definitely see myself working at QEII in the future as it is very community minded and everyone is undeniably supportive and welcoming,” said Alexia.

Of course, they both agree that their identical appearance, overly similar opinions and direction in nursing, as well as working side-by-side in neighbouring wards may be quite confusing for a lot of the staff at QEII.

Metro South Public Health Unit is embarking on the Winter Respiratory Viruses Sentinel Surveillance Program and are looking for volunteers (staff and community) to take part for up to 12-weeks to help enhance individual and community health. 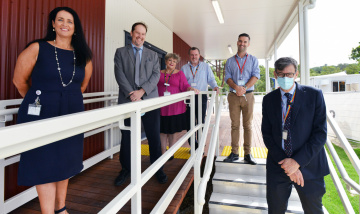 A milestone in the QEII Expansion Program was achieved this week with administration staff moving into the Executive Office modular accommodation.