“Our clinicians worked hard over the past year to improve emergency department waiting times, with an improvement from 67 per cent in 2012-13 to 73 per cent in 2013-14.

“Metro South Health has the second highest elective surgery performance for the state of Queensland, and our clinicians performed 24, 546 elective surgeries in 2013-14, a 4.7 per cent increase on the previous year, as well as reduced elective surgery long-waits for category 1 surgery to zero.

“With a focus on frontline services, an additional 51 doctors, 283 nurses and 94 allied health practitioners were employed in 2013-14 to treat more patients in the Metro South district.

“The hard work of staff and greater efficiencies in health care delivery has led to an operating surplus of $32.1 million. In the coming year, this saving will be reinvested in tackling elective surgery waiting lists, national emergency access targets and delivering electronic medical records (ieMR) to more Metro South Health facilities.”

“These home visits were well above the target for the year and the best result from any Hospital and Health Service in Queensland,” Mr White said.

“Beaudesert Hospital also welcomed the arrival of its first babies in ten years after low-risk birthing and procedural services reopened, so mothers living in the Scenic Rim area can now have their babies closer to home and their families.

“A new Day Procedure and Treatment Unit opened at Princess Alexandra Hospital, which allows more procedures to be performed and goes a long way in reducing the waiting list for elective surgery.

Chief Executive Dr Richard Ashby said a number of innovative projects and programs were implemented during the year to improve service delivery and outcomes for patients in the Metro South area.

“We opened a number of new, world-class facilities, including an expanded emergency department and world-class endoscopy suite at QEII Jubilee Hospital to make significant inroads to the district’s waiting list and meet the needs of a growing south-east Queensland population,” Dr Ashby said.

“We introduced a program this year called Hospital in the Home that treats eligible patients in the comfort of their own home in the Bayside and Logan areas. This is delivered in partnership with BlueCare and allows vital hospital beds to remain free for those who need it most.

“To top off an eventful year, Princess Alexandra Hospital was designated as a prestigious Magnet facility for the third time. Magnet is an international nursing credentialing program and is the highest recognition for nursing excellence that can be attained internationally.”

“Our staff and particularly our clinicians, have been crucial in improving clinical services to ensure they better meet the needs of the community, and we look forward to continuing this trend in the coming year.” 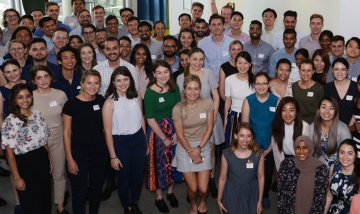 After years of training, 87 new and enthusiastic medical interns have started work at Princess Alexandra Hospital. 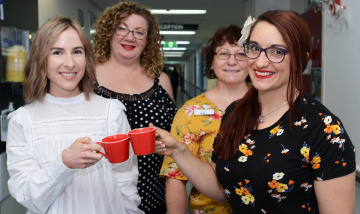 As part of the Eat, Walk, Engage Program running across QEII Hospital, patients on Ward 2AM have been treated to their favourite hot drink which hasn’t been previously available.