Seasoned bushwalker, Neil Parker (54) is smiling from the comfort of his Princess Alexandra Hospital bed after spending two days stranded and broken on a mountainside following a fall down a 6 mt high waterfall.

The hiking guide from Brisbane Bushwalkers fractured his leg and wrist in the fall while on a solo walk in Cabbage Tree Creek on Mt Nebo.

Neil set out solo on Sunday morning treading a well-known track that should have taken him two hours, yet it was two days later he was being airlifted to hospital.

“I had climbed the waterfall many times before, and this time, with it being so dry and the lime on the rock, instead of sticking, slipped and gave way," Mr Parker said.

“I caught myself the first time as I started to slide, but I had too much momentum and over I went. I slid about 20 feet down the face of the rock, cartwheeled and slammed into the rock shelf before I landed in the creek at the bottom.”

Mr Parker sustained a significant fracture to both his left leg and left wrist but managed to splint his leg using his hiking sticks and put his arm in a sling with the first aid supplies he had packed.

“I had medication. I had painkillers – Panadol and Nurofen in my pack. And I was able to put that to great use when it was needed. People in the club ask, why would you carry 10 kilos of equipment every time you go for a walk? This is the reason why, you need to be prepared,” he said.

Orthopaedic Surgeon Dr Nicola Ward said Mr Parker's injuries would have been extremely painful and it was amazing he was able to move to seek help.

"Essentially, with an ankle fracture like he's got, the limb is a deadweight and useless, you can't walk on it, you can't put weight through it and you need to drag it and similarly with the wrist," she said.

"Ultimately with a fracture like this you can expect eight to 10 weeks of non-weight bearing," she said.

Neil credits his story of survival to his preparedness and the rescue mission mounted by his family with the support of the Brisbane Bushwalkers club who formulated the plan on Monday to find him.

Neil has begun his road to recovery at PA Hospital and is thankful to be in the care of our team and not living off his trail mix and lollies any longer.

Social distancing no barrier to care during coronavirus pandemic

Movement restrictions enforced throughout COVID-19 have had little impact on the PA Hospital Movement Disorders clinic with telehealth technology supporting patients with Parkinson’s Disease, tremors, dystonia and other movement disorders across the Sunshine State. 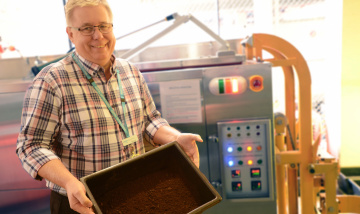 Princess Alexandra Hospital has unveiled the latest major step in the battle to address waste in healthcare with the addition of a new food waste dehydrator which will convert thousands of kilograms of food waste into soil and save the hospital about $50,000 a year.