We are now accepting visitors at our facilities. Please refer to the visiting hours on visiting restrictions for more information.

NEW technology which creates a “mini intensive care unit for livers” has safely expanded the number of donor livers transplanted in Queensland by more than 10%, giving life and hope back to people who urgently need a new liver to survive.

This organ incubation system is making use of precious donated livers which previously would not have been used, often due to the distance between donor and recipient.

Qld Liver Transplant Service surgeon Dr Peter Hodgkinson said it had tripled the time donor livers could be safely preserved outside the body, from around 8 hours right up to 24 hours.

“So far, 24 of the 26 marginal livers revived on the OrganOx machine have been successfully transplanted to grateful Queensland patients from the organ transplant waitlist,” he said.

For perspective, there were 49 liver transplants in Queensland last year and 10 of these proceeded because of the OrganOx.

Unlike conventional storage on ice, the OrganOx Metra machine gently perfuses donated livers with fluids, nutrients, and oxygenated blood at room temperature to help restore function. Revived livers quickly blush pink and can even produce bile and metabolise glucose while being perfused.

Dr Hodgkinson said the preservation technology was currently applied only to “orphan” donor livers, that were previously considered ‘marginal’, ie. livers which previously might not have been suitable for transplantation.

“With this technology, those livers can now be stabilised and carefully observed to determine their actual suitability to transplant.

“Previously we had to be very conservative in our choices. This new machine takes a lot of risk out of that equation.”

This technology has proven particularly effective in Queensland, given the logistical challenges posed by longer distances and organ retrieval times, as well as the increasing number of organs donated after cardiac death (rather than only after brain death).

“Previously, when you had a small donor pool and a very large state to cover, it would be a huge risk to take, particularly if that transplant failed and another was needed urgently.

“Before this technology, we could only consider transplanting livers donated after cardiac death if they were coming from either Brisbane or Gold Coast hospitals essentially.

“Now we’ve been able to accept donor livers after cardiac death from North Queensland and even from Melbourne.”

Dr Hodgkinson said it was extremely gratifying to know patient time on the waitlist had been reduced and that five-year survival rates continued to improve in Australia.

“Historically, liver transplants have had a 90% survival rate after five years, but now our five-year survival rate has improved to 96%.”

While transplant surgeons continue to innovate and Australia is among the most technologically advanced services in the world, no transplant surgery can proceed without family consent to donate their loved one’s organs.

“When you pick up the phone and they’re telling you to get yourself organised and get to the hospital because they have a liver for you, you go a bit numb.

“I had waited two years for that call, and I can not thank my donor or their family enough,” he said. “It’s the greatest gift one human can give to another, the gift of life. That’s what they’ve given me.”

In the lead-up to DonateLife Week 2021, Australians are being reminded to check they are registered on the Australian Organ Donor Register. It takes less than a minute at donatelife.gov.au/register 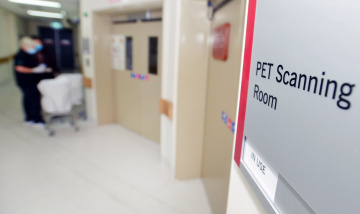 The Positron Emission Technology (PET) CT is celebrating ten years of service at the Princess Alexandra Hospital with services continuing to grow year on year. 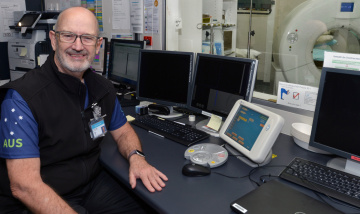 Familiar face in Radiology hangs up the vest after 46yrs

From Cadet Radiographer to Assistant Director, long standing Princess Alexandra Hospital Radiographer, Tim Way, will be retiring from his post next month.