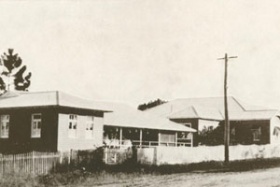 Beaudesert Hospital has been providing quality health care to the local community for over 110 years.

It began life in 1900 as a small cottage hospital.  The head of Beaudesert’s major timber milling firm, Mr Isaiah Lahey, recognised the need for a community hospital and canvassed members of the community for subscriptions.  Subscribers purchased land for £40, with the full amount donated back to the hospital by the seller.

The hospital was officially opened on 30 June, 1900 with four rooms and the capacity for eight patients.

Dr William Beet, the hospital’s longest serving medical superintendent, arrived in 1903.  Over his 44 years service, Dr Beet was instrumental in the hospital’s expansion into a well-functioning community healthcare facility.  He oversaw the 1919 construction of the Nindooinbah operating theatre as well as the hospital’s first maternity section in 1925.

When Dr Beet retired in 1947, the hospital had grown from a two-bedroom cottage hospital to a community facility capable of admitting 30 patients to the general ward and an additional 16 patients to the maternity ward.  Dr Beet returned to Beaudesert Hospital in 1957 as a patient prior to his death.

Expansion continued throughout the 60s and 70s, with a new maternity wing constructed in 1970, a reconstruction of the administration block and nurses’ quarters in 1962, and the establishment of the hospital as a nurses’ training school in 1976.

The hospital was voluntarily maintained for 45 and was one of the last hospitals in Queensland to be placed under the control of the state government.  For many years it formed part of the South Brisbane Hospitals Board with headquarters at Princess Alexandra Hospital, until the Board’s abolishment in 1991 in favour of regional health districts.  The hospital came back under the auspice of a hospital board in 2012 with the establishment of the Metro South Hospital and Health Board.

Beaudesert Hospital celebrated its 100 year anniversary in 2000 with the opening of a brand new, 22-bed hospital.

A brief history of Beaudesert Hospital